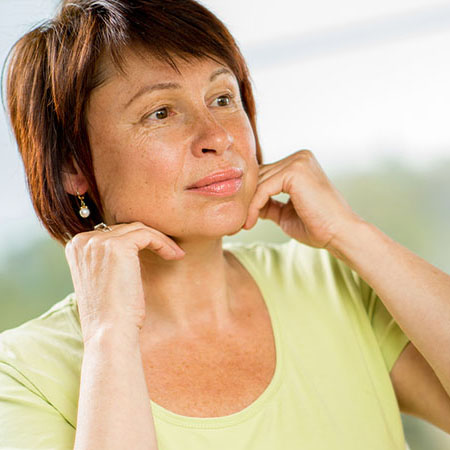 A double chin – also known as submental fat – is very common in both men and women.

While it is most commonly associated with weight gain, there are many other reasons why you may have excess skin or fat around the neck area. The excess fat on the chin and neck can make it look like you have more than one chin. This is where the term ‘double chin’ originates from.

The most common causes of a double chin are ageing, weight gain and genetics. All of these can result in excess fat or loose skin under the chin.

Getting Rid Of A Double Chin

Double chins are very common. That’s why there are many treatments that claim to tighten the skin around the chin area.

If your double chin is caused by being overweight, moderate exercise and a controlled diet can help reduce its appearance. However, this isn’t always guaranteed. Chin fat can be resistant to exercise. Furthermore, your double chin might be a result of loose skin that has lost its laxity – not excess fat.

Invasive procedures are also a viable option. These are surgical procedures that require going under the knife. Invasive surgery is often costly – it also comes with risks, which is why it’s not something we recommend.

To avoid the negative side effects that come with surgical procedures, we have an exceptional alternative treatment.

CoolMini™ is a new CoolSculpting treatment we offer here at River Aesthetics. It helps to drastically reduce the fat under your chin. This results in a jawline and chin area that looks tighter and more defined.

CoolMini™ is similar to other CoolSculpting treatments. However, this treatment is especially effective in treating double chins, as it can target smaller areas of fat.

How Does It Work?

This treatment works by freezing the fat cells in the targeted area – which causes the fat cells to die. CoolMini™ is perfectly safe too, as fat cells have a higher freezing temperature than other cells.

After your CoolMini double chin treatment, you will see dramatic results.

However, they are not immediate. CoolMini™ relies on the body’s natural process of eliminating dead cells. For six months after the procedure, your body will continue to flush out these dead cells, which in turn eliminates excess fat on the neck area.

Another benefit of CoolMini™ is that there is no downtime after the procedure, unlike surgery. So while your body works to reduce the appearance of your double chin, you will be able to resume your normal, everyday life.