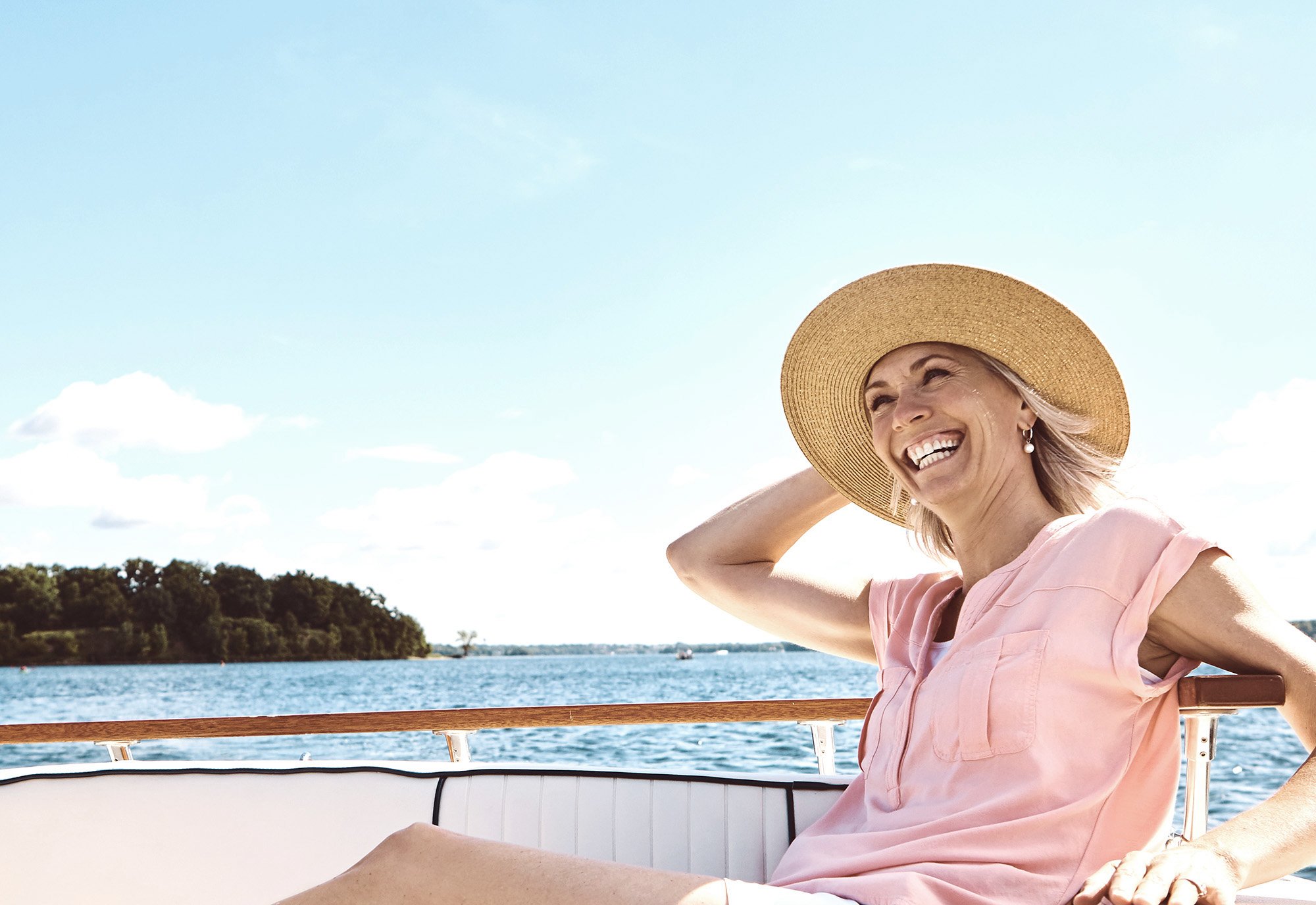 We all know that the skin ages as we grow older, but this can be accelerated for women around the time of the menopause by approximately 6%.[1]  Most aesthetic practitioners will see a large number of menopausal women who are trying to delay this acceleration and keep their youthful appearance natural, without looking like they have had anything ‘done’.

Ageing is multifactorial, as described below:

1. Bone resorption and remodelling leads to volume loss and changes the overlying soft tissue and skin.

2. Fat loss and redistribution causes volume loss and changes the contours of the face. Deeper fat ‘thins out’ and slides, blocked by retaining ligaments, leading to deep creases and contour defects.

4. The dermis thins due to collagen loss, which causes a reduction in skin elasticity and moisture. Subsequently, ageing skin is thinner, dryer and more prone to wrinkles, sagging and increased pigmentation.

5. A drop in oestrogen levels, associated with the menopause, causes a loss of elasticity, which worsens already sagging skin. [2,3]

A 49-year-old woman presented to clinic who had previously only been treated with botulinum toxin. She had been treated with toxin in the upper face in the glabella, forehead and around the eyes for dynamic lines. She had also had toxin in the lower face for masseter hypertrophy.
The patient said that she always had full cheeks, but felt that they had dropped, especially since she started the menopause in her mid-40s, which had subsequently caused her to develop jowls. The patient had started taking hormone replacement therapy (HRT), which was prescribed by her gynaecologist, but she continued to feel the menopause was causing her skin to age rapidly. [4]

We discussed the different treatment options with her to address her jowls, which included hyaluronic acid (HA) fillers, radiofrequency skin tightening, high intensity-focused ultrasound (HIFU) skin tightening, non-surgical thread lifts and polycaprolactone (PCL) biostimulatory fillers. Threads could have lifted and volumised, but has more downtime then the other modalities, and radiofrequency could tighten the skin but not volumise it. We agreed on the PCL-based filler, Ellansé, as we felt this would improve her skin texture, restore her volume loss and elasticity, as well as improve moisture with minimal downtime, that would be long lasting. Although HA fillers would have provided the volume, the PCL filler maintains volume better over time.[5] From experience, HA fillers tend to last no more than one year, whereas PCL-based filler lasts in excess of two years.

We often recommend a combination treatment and discuss this with our patients. One possible combination we have seen success with for treatment indications such as this, is to start with radiofrequency for skin tightening, followed by a dermal filler, followed with a thread lift for optimal lifting and volumisation. This is especially effective in our older patients. For this patient, we deemed it wasn’t necessary.

Treatment with PCL-based collagen stimulatory fillers allows an immediate correction, but also volumisation through biostimulation and neocollagenesis. [6] The formation of new collagen helps to regain elasticity and moisture, which has been affected by the patient’s lowering oestrogen levels. The biostimulation improves volume in the hypodermal fat layer, by collagen stimulation, which improves dermal thickness and elasticity, similar to hyaluronic skin boosters, but with results lasting in excess of two years.[7]

The filler is 70% aqueous carboxymethylcellulose (CMC) gel carrier and 30% synthetic PCL. This allows immediate filling from the CMC, followed by stimulation of the body’s own collagen; neocollagenesis by PCL. The carrier is not cross-linked, which we believe makes it easier to inject and creates a smooth extrusion force.[8]

PCL is totally resorbable and non-toxic, and biodegrades to hydroxycaproic acid and water, which is subsequently completely excreted from the body.[9]

When injected, there is a foreign body response to the product. This starts within two hours with the initial inflammatory phase, followed by the production of macrophages, which in turn stimulate fibroblasts to form type III collagen (scar tissue). Within two weeks, the microparticles are encapsulated by fibroblasts that produce type I collagen around the particles. This response varies on the patient’s age and health and also on the particle shape and size. Particles less than 10 micrometres (μm) are phagocytosed by macrophages and eliminated from the body. Particles between 25-50μm, which are spherical in shape, produce the most fibrosis and new collagen. Particles greater than 50μm produce a prolonged inflammatory reaction producing only type III collagen.[9]

Using a 25g cannula, 2ml of the PCL-based filler was injected into the lateral mid-face region, 1ml per side. The product was placed sub-dermally in retrograde linear threads with a fan technique. This area was treated to allow volumisation of the mid-face, and to lift the lower face. The patient was advised that the result at this stage, instantly after treatment, she would see about 85% of the final result. This would reduce slightly at about two to four weeks post treatment, and then, as the CMC carrier gel is resorbed, the PCL would stimulate neocollagenesis to replace this over the following weeks. She was advised that we would review her at three months, when the neocollagenesis would be complete and 100% of the overall result would be visible.

At her three-month review, the patient was extremely happy with the result and felt she looked ten years younger. There was restoration of the volume to her mid face and the product had lifted her jowls as you can see from her photographs. Most patients need reviewing once a year to evaluate whether any further treatment is needed. We try and review our patients annually, if not sooner. A lot of patients attend for regular toxin treatments so we can monitor them then, to see if more threads or dermal filler are needed.

There is a potential risk for bruising and swelling, especially with biostimualtion, and we always warn patients of this, but the patient experienced no side effects.

In the case of this particular patient, we achieved the desired result of lifting her jowls and volumising her mid-face, similar to her pre-menoopausal appearance. The PCL-based fillers used are safe, effective and long-lasting, and can be used for biostimulation as well as volumisation. For this patient, the filler improved skin laxity and texture via neocollagensis, both superficially and at a deeper level. The patient had restored shape and redefined contours. This treatment is a good option to be able to offer your patients as an alternative to standard HA fillers.

Dr Charlotte Woodward is a medical aesthetic practitioner with more than 27 years’ experience across both general practice and aesthetics. She is the co-founder of River Aesthetics, which has clinics in the New Forest, Sandbanks and at Grace, Belgravia in London. She specialises in thread lifts and vaginal rejuvenation.

Dr Victoria Manning is an aesthetic practitioner and GP with more than 22 years’ clinical experience. She is co-founder of River Aesthetics and specialises in thread lifting and vaginal rejuvenation. Dr Manning is a trainer and international speaker at aesthetic conferences, as well as a media contributor.