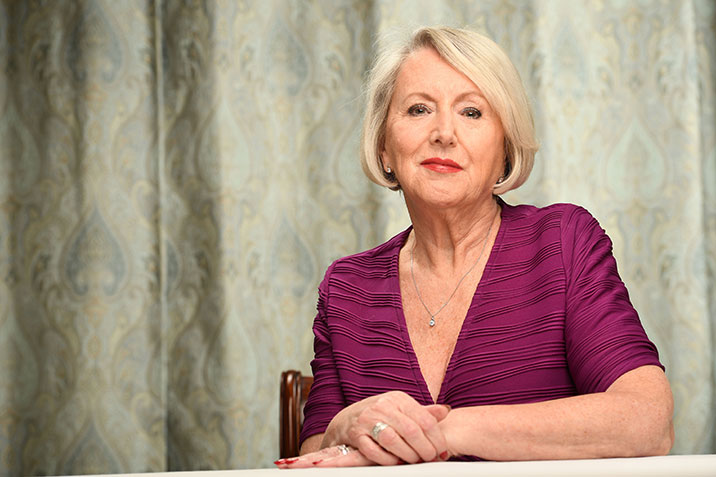 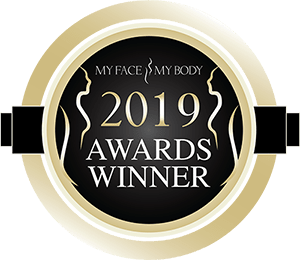 A case of a facial palsy which was corrected non surgically has won Non-Surgical Make-Over of the Year at the MyFaceMyBody Awards which were announced today, 26th November 2019.

Stevie Jenkins, the acoustic neuroma patient who was featured in the award winning case is as thrilled as the doctors who treated her at medical aesthetics practice River Aesethics: “Since treatment to correct my facial palsy my confidence has built steadily. I met my new man’s friends for the first time recently and was so pleased to feel I looked normal. I am now ready to face the world feeling good about myself. People have even commented that I look glamourous which has really boosted me further. I am buying brighter coloured clothes, I am more sociable and happier to meet new people; confident people aren’t feeling sorry for me.”

“I’m keen to increase awareness about the treatment options for people with acoustic neuroma. There is no need for them to hide away because they don’t want others to see them. I did have the option of major surgery to correct some of my concerns, but results can take years, and I know that some suffer with horrendous scarring. I am so pleased there was a non-surgical option, that is so life enhancing for me. I was recommended to visit a doctor-led aesthetics practice called River Aesthetics who recommenced treatment to reduce the asymmetry of my face non surgically. The results were great immediately and actually got better over the next few weeks.”

The two non-surgical treatments used in Stevie’s treatment by Dr Victoria Manning and Dr Charlotte Woodward come from the Sinclair Pharma portfolio. Ellansé is the first dermal filler which provides both instant and gradual results; increased volume occurs immediately post-treatment, however volumisation continues to develop for up to four months as the initial carrier gel is absorbed by the body, but not before microscopic spheres suspended in the gel have stimulated the body to create its own healing collagen. The results can last for up to four years.

Silhouette Soft threads initiate a unique two-stage process – an immediate skin lift and gradual collagen regeneration. Think of it as the creation of scaffolding for drooping areas of the face. The threads, which are dotted with a series of tiny cones along their length, are introduced just under the top layer of the skin. The cones are bi-directional which secures the threads in place in the subcutaneous layer and allows them to be pulled in two directions to lift the skin.

“Caring for her husband with terminal cancer and having had an acoustic neuroma herself had taken quote a toll on Stevie. She was left with a facial palsy and subsequent asymmetry which she found extremely embarrassing. She came to us initially not for a cosmetic enhancement but for a treatment to make her look and feel’ normal’. She has a new partner and she wanted to look the best she could. At rest she had marked asymmetry on the left side, with loss of volume and a general ptotis of the midface. The asymmetry was heightened on animation. She had had a previous blepharoplasty eye lid surgery to try and help the hooding that she had but she said when tired she developed a ptosis that affected her vision. She also had a deep scar on her chin from having her head clamped in a brace through the extensive surgery.

“As this was a complex case a multidisciplinary case we first opted to correct her profound asymmetry using Ellansé – which is a unique collagen stimulating dermal filler – and tried to balance Stevie’s face both at rest and in animation. Small amounts were deposited in the deep medial cheek fat pad on the left side to balance the volume deficit, in addition to supporting the cheek at her first appointment.

“For life changing treatments like these, our ethos is to develop the effects and improvements over time so a phased approach is often adopted in our practice. Interestingly Stevie felt that her left eye felt supported straight after treatment. I’m keen to increase awareness about the treatment options for people with acoustic neuroma. There is no need to hide away”

“At her three-month review we tweaked the jaw line, jowls and marionettes (nose to mouth lines) with additional Ellansé and inserted a single eight cone Silhouette Soft suture in her left brow to support her left eye. Not to overtly lift the brow but to help maintain the eye position when the muscle tired. The two non-surgical treatments used in Stevie’s treatment come from the Sinclair Pharma portfolio.

An acoustic neuroma is a noncancerous and usually slow-growing tumour that develops on the main (vestibular) nerve leading from the inner ear to the brain. Branches of this nerve directly influence balance and hearing, and pressure from an acoustic neuroma can cause hearing loss, ringing in the ear, sleep apnoea and lack of co-ordination.

Facial Palsy affect tens of thousands of individuals in the UK each year, most make a full recovery within 2-3 months, however, approximately 20% of those affected with the condition do not. A significant proportion of cases are only aware of surgical options to address their concerns. The team at River Aesthetics, and Stevie herself, were keen to raise awareness of this, non-surgical option. And Stevie was very happy to publicise her case in the press.

For Stevie Jenkins, the first sign of her acoustic neuroma occurred when she awoke one morning, nine years ago and was deaf in one ear. Initially thinking it was likely to be an infection, she visited her doctor, who monitored her condition, and over the space of around a year, and multiple tests, Stevie was formally diagnosed and given regular, annual brain scans. At the time, Stevie lived with her husband, and they both undertook volunteer work with underprivileged women in Thailand.

Three years after diagnosis, in 2012, Stevie woke one morning and on getting out for bed fell over. She felt drunk. Her most recent brain scan had only taken place around eight months previously, however, during this time, Stevie’s tumour had grown significantly, wrapping itself around her facial nerve. Her balance was severely affected, and the decision was taken to operate. Surgery lasted 15 hours. Much of the tumour was removed, however, Stevie was left with facial paralysis of around 60% initially, which reduced to a more ‘acceptable ‘35% after 2 years of facial exercises and massage – she said she looked like she had had a major stroke.

Stevie was keen reduce the effects of her facial paralysis had on her appearance. Muscle relaxing injections with botulinum toxin helped a little, as did facial exercises, and slowly she began to see small improvements, but didn’t like the look the toxin treatment had on her face.

In 2015, Stevie’s husband was taken ill in Thailand and she nursed him tirelessly until he passed away, losing three stone in the process. Shortly after she returned to England to try and re-build her life. The stress and weight-loss took their toll on Stevie’s appearance and she felt as though her face had “collapsed”.

Following her bereavement, Stevie was keen that people did not feel sorry for her. She freely admits that life has thrown a lot at her, but she knows she can deal with it. She joined an online support group, which she now runs, called “Acoustic Neuroma Tumour Survivors” (ANTS for short) which encourages members to discuss anything regarding their tumour and dealing with issues related to surgery.

“I write blogs for the group – one of my best received pieces has been about grief. Not the grief of a passed love one, but a grief many people with acoustic neuroma feel about the loss of the person we once were. It can take time to get used to what the condition has done to your appearance – our new normal. There are members of the group who are almost agoraphobic and I think it’s important to discuss how we feel, and to share our experiences, not only of the condition, but even more importantly steps we have taken which may be life enhancing.